It is my pleasure to give you a warm welcome to JWsurvey.org. This website has been launched to give voice to millions of Jehovah’s Witnesses around the world who would not normally have the opportunity to say what they really think about the Watch Tower Society, or the teachings and practices of the Governing Body.

If you are a Jehovah’s Witness, or a former Witness, you will be aware that the opinions of rank and file publishers (and even elders) are rarely sought by the Society. The small number of men making up the Governing Body have declared themselves the “faithful and discreet slave” of Matthew 24:45, thus claiming sole control over the organization’s teachings and policies. These men are most certainly NOT interested in the opinions of the “silent majority” of Witnesses under their authority. If they are, they have a strange way of showing it!

This website seeks to redress that balance by means of an annual survey that is conducted anonymously throughout the world. The first survey was taken in 2011, and immediately attracted the opinions of 1,118 voters before closing at the end of the year. The results were posted to the Governing Body for their attention and review but, predictably, they never replied.

The following year, 2012, the survey received votes from 1,488 current and former Witnesses, most of whom expressed their concern at various Watchtower teachings. The remarkable events of that year (the Candace Conti case and the “new light” about the faithful slave) certainly seemed to get people talking.

Subsequent surveys have allowed in excess of 6,000 per year to express their true feelings about the organization and its leadership, and we are optimistic this number will only increase as JWsurvey grows in popularity.

This website has been created and made available as a free resource so that anyone, whether they are a former or current Witness, or in some way associated with Witness friends or relatives, can give their honest opinions about Watchtower and the increasingly cult-like direction in which it is headed.

We adopt a strictly non-religious viewpoint, meaning we refuse to promote any belief structure in particular. For this reason, we cannot be accused of trying to “draw off followers.” We are merely interested in garnering the views of ordinary Witnesses and reporting on the facts.

The Governing Body of Jehovah’s Witnesses has not authorized or sponsored this survey, and it is run entirely without any influence or input from them. However, we genuinely feel that the brothers who serve on the Governing Body, having assumed such overwhelming responsibility, should take note of how ordinary Witnesses and the general public feel about their leadership, since millions of lives are affected by decisions they make at their private weekly meetings.

My name is Lloyd Evans, and I am the founder of this website. I set it up in October 2011 with the help of a fellow activist while I was still one of Jehovah’s Witnesses, writing under the pseudonym “John Cedars.” Eventually, I left the organization for conscientious reasons. You can read my story on this link.

I first had the idea to begin gathering the opinions of Jehovah’s Witnesses and their associates around the world because of a variety of issues that continue to be of real concern to me. I believe that ordinary Witnesses who devote their entire lives to loyally serving Jehovah, through what purports to be God’s spirit-directed organization, should have some say in the decisions that are made on their behalf.

It is my belief that not all is well within the organization. I don’t consider many of the teachings and practices encouraged by the Governing Body to have been formulated with the best interests of ordinary Witnesses at heart.

For example, take the practice of shunning or “disfellowshipping.” The Apostle Paul’s words to the Corinthian congregation were as follows:

Clearly the Apostle Paul was delivering this admonition for the purpose of keeping the congregation clean. But to what extent should these words be applied? By saying “not even eating with such a man,” Paul indicated that his words weren’t directed against family members (who would daily eat with one another), but against other brothers in the congregation with whom one might consider sharing a meal.

There is no reason to insist that the word “anyone” should be applied arbitrarily to “everyone,” irrespective of age or circumstances. Even Watchtower publications acknowledge that there should be some exceptions where family members are concerned. For example, a disfellowshipped husband is not to be shunned by his wife or children, and parents are not banned from speaking to their disfellowshipped children if they are not yet old enough to leave home.

But why should it end there?

Many share my opinion that there is scope to extend even more mercy in applying this scripture than is currently encouraged by the teachings of the Governing Body. Jesus said the following to the unrighteous pharisees:

Jesus identified mercy as playing a crucial role in the extent to which laws and principles should be enforced. Many do not think it is merciful that older teenagers, many of whom were baptized at an extremely young age (sometimes as young as 9), are forced out of their homes by their parents and then cruelly shunned, often for the rest of their lives, through a mistaken and abhorrent interpretation of the Apostle Paul’s advice.

The Society’s publications themselves warn that “no one should be forced to… choose between his beliefs and his family.” (July 2009 Awake!, p.9) However, they apply this reasoning to every religion but their own. 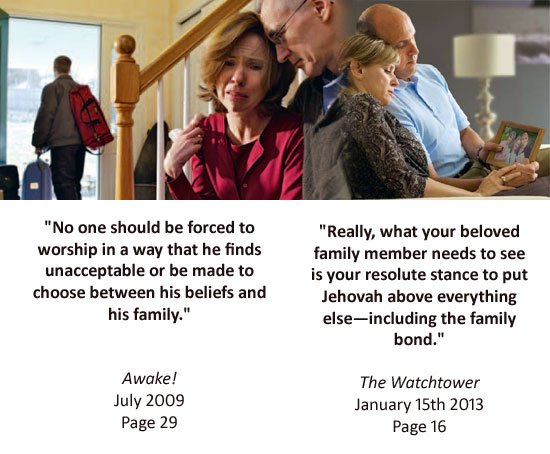 The scriptures clearly prescribe “shunning” purely as a measure for maintaining the spiritual cleanliness of the congregation, and not for the purpose of breaking up families. To go one step further and insist that shunning should also apply to families is both destructive and deeply unmerciful. It also violates the principle expressed by the Apostle Paul at 1 Timothy 5:8 where he said:

These and other teachings of the Governing Body are increasingly becoming a cause of sincere distress for many Witnesses who wish that the organization could adopt a more merciful and loving stance. In particular, one can now be disfellowshipped as an “apostate” merely for disagreeing with the Governing Body over this or other issues.

It is my sincere desire that by means of this website, and its annual surveys, the Governing Body will humbly consider the pleas of both myself and like-minded ones around the world who long for the Watch Tower Society to be a more loving organization – one that truly reflects the need for respect and tolerance toward other people’s beliefs.

The members of the Governing Body are only human, and no matter how much they may pray for wisdom and insight, they cannot possibly be fully aware of how their teachings and directives are impacting the lives of their fellow worshippers on a daily basis. That is what makes this survey website so important. It serves as a constant reminder for them to show greater kindness and mercy in undertaking the role that they have assumed as the faithful and discreet slave.

I would like to thank you in advance for your support for this site, and for getting involved in our important work.