Last weekend congregations of Jehovah’s Witnesses all over the world discussed the November 15, 2013 Study Edition of the Watchtower at their meetings.

As reported on this website back in August, this particular issue of the magazine contains the chilling counsel that Witnesses “must be ready to obey any instructions we may receive, whether these appear sound from an objective or human standpoint or not.”

In view of the above jaw-dropping injunction, which completely negates common sense and encourages mindless subservience, one poster set up a test on a Facebook group frequented by Jehovah’s Witnesses to see whether they would agree to follow this counsel to its fullest extent.

The test was worded very simply, as follows… 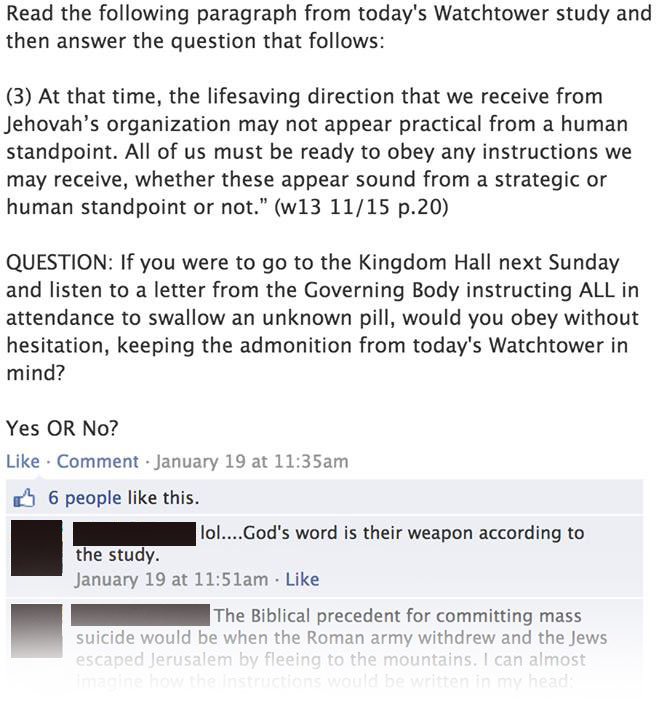 Within the first 3 hours of the post going up, 23 Facebook users responded. Typically, not everyone was able to give a definitive answer. But of those that did, at least five responded that “yes,” they would take the pill. 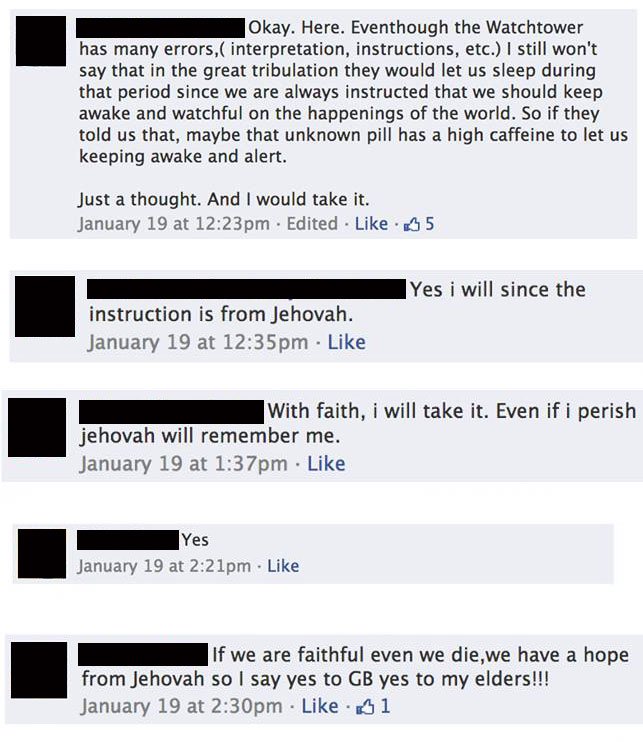 It is perhaps noteworthy that of the five who answered “yes,” two did so embracing the likelihood that the “unknown pill” might have a lethal effect.

In making this argument, the lady overlooked the fact that taking a pill is not necessarily a negative thing. By far the majority of pills taken around the world every day are taken for the betterment of health, not the reverse.

And lest we forget, the Governing Body already suggests that their wisdom supersedes medical knowledge, at least in the area of blood transfusions.

The wording of the test was flawless. It gave no hint at what the pill would do once taken. It merely asked whether one would take it if instructed to do so by the Governing Body or not. It was a simple yet effective examination of the extent of one’s loyalty.

It should be noted with some relief that an equal number (5) said that “no,” they wouldn’t take the pill. Nevertheless, that five people responded in the affirmative within three hours is a chilling indictment against the mental fortitude and rationality of some Witnesses.

If the Governing Body wants a legion of unthinking drones who will follow their instructions even if potentially hazardous, it appears they have achieved this objective – at least in part. 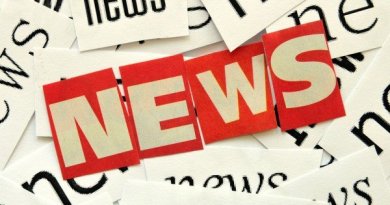 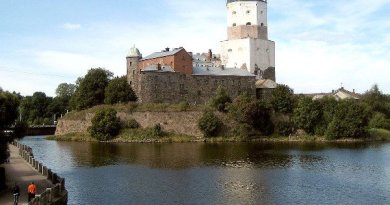 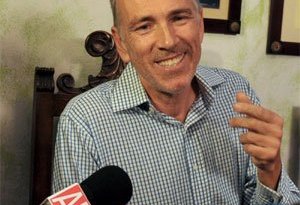 72 thoughts on “Would you take the pill? – A simple Facebook test has shocking results”